In a broad sense, software that simulates a particular function or operation in the same way as the original one.

In a narrow sense, especially for the OS, such as a personal computer, smartphone, it is good, a specific OS on a certain OS (A) to move a specific OS (B) as if it were software, it will be able to use the application that only works in the environment of B normally.

These days, the famous one is the following to run Android on Windows.

It is sometimes abbreviated as emu. 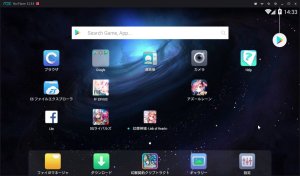 【Explanation of how to use the whole】

[How to assign touch interaction to keyboard]

The Japanese version has been officially released, an emulator made in China (Hong Kong).

There is also an official Japanese version blog.

It's probably the most stable of the free ones, and it's easy to operate.Especially, there is a reputation for the operation of the game app.

The best thing is that it's easy to introduce anyway.If you install the app normally, you can use it as it is.

In addition, google play is supported as standard.

There is also a rich number of developer functions, such as the ability to save the log for mouse keystrokes.

It is also highly evaluated that continuous development is underway.

However, the default is 4.4.2, so you need to switch it manually.Select "Add Emulator > New Emulator" from "Multi-Window" in the toolbar to install it.

# Most apps also work in 4.4.2, so you don't have to change them.On the contrary, there is a disadvantage that becomes heavy when the version is raised. 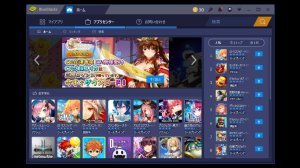 [How to assign touch operation to keyboard, gamepad]

Simply install it as a regular app and you'll be ready to use.Even if you are not familiar with the PC before the emulator, because it is a level that can be handled if you have knowledge of Android, it is recommended for beginners.

Like Nox, it is one of the few emus that continuously develop sought and operates stably.

Previously in the free version, but it was a ridiculous specification that the app for advertising purposes is automatically installed every day, the major version was abolished after it has become "3", now it is only one display of the advertising app as well as Nox, it became comfortable.

The settings have been simple and easy to understand, but on the other hand, there are few items that can be set compared to other emulators, especially Nox.

Other functional aspects are also necessary enough, while others are somewhat lacking.In particular, the official seems to be pushing the use of the game app, but it is a shame that it does not correspond to the essential gamepad , because it is only supported by rival Nox.

If you want to play on the gamepad to the end, you need to use other software such as "antimicro" and "JoyToKey" to assign keyboard operations to the gamepad.

(I feel that the previous version was supported by the standard…)

AI optimizes the allocation of resources in games where network latency is low.

Multi-window, multi-instance, multi-account compatible.In other words, it is possible to use multiple apps and games at the same time easily.

There is even a function to translate the text in the app in real time.

There is a point system, just log in to BlueStacks.It can be used to apply for prizes.

There are plenty of Compatible Android versions, but you need to install them manually separately as well as Nox.

It claims to be more versatile than Bluestacks or Genymotion.

You can use a real smartphone as a controller (gamepad), or you can support a microphone, and certainly there are a lot of functions.

"We guarantee that you will always be able to use the latest version of Android," he said.

It is also possible to install the Android app to Andy directly from the browser on the desktop OS @PC.

You can access local files outside of the virtual environment.

XInput-compatible gamepads and PlayStation controllers for Xbox and PC can be used as standard.

Although development had stopped for a while, it received a lot of investment, and it was reopened in full scale around 2018, and the official site was updated.

However, as of 2019, the new version has not been released for more than a year.

The following emulators are not recommended.

If development has stopped, or it is not completed by software alone, it is a little difficult to use it for development now.

It was developed by koplayer inc., an unknown entity.

It is not clear whether it is really a corporation though it calls it "Inc.".

The official website is compatible with English and Indonesian, so it seems to be a southeast Asian organization.

It was made specifically for the use of games.

At present, is it easy to go out of the trouble a little?

As the name suggests, the original Android emulator provided by Google.

Because it is intended for developers to the end, it is not easy for beginners to handle at all, it is necessary to basic knowledge dealing with Android Studio is at least an integrated development environment.

However, you can always use the latest Android features, and you can customize the details.

An emulator developed for gaming purposes and compatible with the latest version of Android OS.

The official site may not be accessible and development may have already stopped.

Therefore, if you want to get it now, you have no choice but to get what is distributed on the site of a third party .

It is said to move lightly, but there is still a strong sense of development.

Google Play is not compatible, so you'll have to put the .apk file in your emulator folder yourself.

The official site may not be accessible and development may have already stopped.

Therefore, if you want to get it now, you have no choice but to get what is distributed on the site of a third party .

It is touted to work with low-spec machines.It is also officially supported in Windows XP.

In the free version, Android only supports version 4.0.4, and it comes with adware and advertising ware.

There is no feature in this way, and there is no reason to dare to use it because it is with adware at all.

Some apps, especially games, are anti-cheat and anti-cheat, or they're no more useful from the emulator, so it may not make much sense to introduce them.

Considering the effort, it can be said that it is more constructive to buy a cheap tablet obediently and use it there.

What to do when chrome starts slowly [summary] browser, such as the deletion of the download history
Prev

What to do when chrome starts slowly [summary] browser, such as the deletion of the download history

*Introduction* The following is a brief ...

Free Android emulator list that can be used on a pc – smartphone app works in Windows, etc. [Recommended]

What to do when chrome starts slowly [summary] browser, such as the deletion of the download history

*Introduction* The following is a brief ...